Anti-Racism, Anti-Oppression, and Multiculturalism in My Ministry

Our Unitarian Universalist faith calls us to nurture and support individual growth and healing, to build vibrant, radically-inclusive, anti-oppressive, multi-cultural religious communities, and to be prophetic witnesses for transformation in society. This work must engage our minds, hearts, bodies, and souls, while working to counter oppression at all levels – individual, institutional, cultural, and societal. Beyond all of this, however, we are called to integrate the work of countering oppression into the very theological and spiritual grounding of our faith. Countering racism and oppression has been central to my identity and my service to Unitarian Universalism for nearly fifteen years. This work requires not just commitment, but sustained commitment; not just love, but sustained love. To live out our faith, the journey toward wholeness must a process of continuing renewal of dedication. 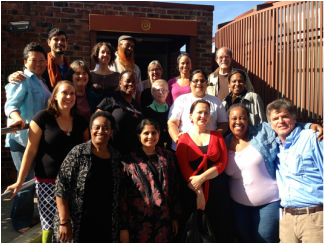 Staff and Faculty at Starr King School for the Ministry
I grew up in the 1980s and 1990s - the era of “colorblindness.” Back then, the popular viewpoint was that being “colorblind” – pretending not to see or care about race – would eradicate what racism remained after the civil rights and black power eras of the 1960s and 1970s. It was a well-meaning philosophy, but in the long-term, it seemed to only push honest and healing discussions about race deeper underground. As a child, I learned that I was not supposed to see race, and therefore pointing out racial injustice, or anything about race at all, became equated in my mind with being racist. My generation of white children was taught that silence is the cure for racism, speaking out only perpetuated racism. We were taught to fear being called racist more than being racist itself. In her essay, “Not Somewhere Else, but Here: The Struggle for Racial Justice as a Struggle to Inhabit My Country,”[1] theologian Rebecca Parker calls this process, common to many white people, a “cultivation into passivity.”
And yet, I felt a gnawing dis-ease about racism nonetheless. Growing up with liberal white UU upper-middle-class college-educated parents, in a mostly white suburb of Boston, I was taught the values of equality, tolerance, and generosity, but did not learn about systemic racism, classism, or other oppressions. In school, we learned about the history of southern slavery, but not about Northern financial backing of slavery. We learned how the land on which we lived was once occupied by Native Americans, though the truth of their genocide was never mentioned in our annual Thanksgiving plays about a peaceful Turkey dinner 450 years ago in nearby Plymouth.

We knew that racism had once existed, but we were taught that the Civil War and the Civil Rights Era had done away with most of it, a handful of violent bigots at fault for any remaining vestiges of racism. But I still noticed race, no matter how much the media told me to be colorblind. Sesame Street showed me a multicultural, multiracial world of children laughing and playing together, but in my town, nearly all the other kids were white. Racism still seemed to exist, no matter what people said about Rev. Dr. Martin Luther King, Jr.’s heroism. This part of the white experience is what James Baldwin calls “not knowing and not wanting to know;”[2] Rebecca Parker calls it “education into ignorance.”

It was transformative and liberating, therefore, when I was introduced to anti-racism work through the UU youth movement, Young Religious Unitarian Universalists (YRUU), in my late teens. Anti-racism work was the opposite of the silencing and obfuscation of racial injustice I learned in the public schools of the colorblind era. My new definition of racism as “racial prejudice plus systemic power” described racism so much more fully than the “individual racial bigotry” definition of my childhood. Suddenly, I understood how entrenched power fed systemic racism in the form of criminalization of men of color, de-funding of urban schools, discrimination in healthcare and employment, and housing segregation.

Though it wracked me with guilt, it also made sense that I was implicated in racism as an unavoidable recipient of white privilege. I saw clearly for the first time how I had benefitted from racism, including the fact that, if I chose to, I could ignore racism my entire life with no negative material consequences. In fact, up until that point, I had ignored it. But I also learned that this was one of those unearned privileges that I had the power to fight. In my first step on the life-long journey toward wholeness, I committed to fighting racism every day of the rest of my life. 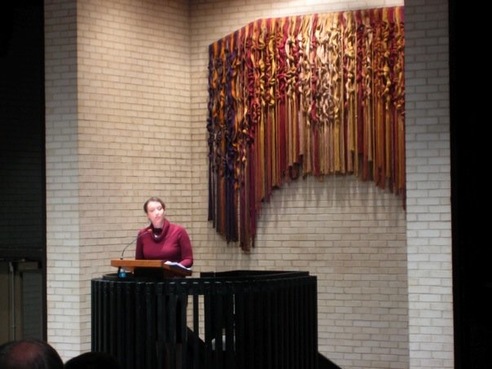 Giving the Keynote address at the 2008 Allies for Racial Equity national conference
But I didn’t yet have the tools for the fight. YRUU became my community of challenge, support, and accountability, and we learned together about how racism functioned within institutions. First on our to-do list was recruiting a more diverse leadership team, and from there we deepened our relationships with each other while engaging in the difficult work of institutional and cultural transformation. I grew as a person, learning to take risks and speak up about oppression where I saw it, even when my fear of making a mistake threatened to immobilize me. I grew as a leader as I learned to identify and dismantle oppressive policies and learned how to analyze power in situations; speaking up or stepping back accordingly.

Soon countering oppression was not just “work that I did” – it became part of my very identity. I carried this analysis and commitment into friendships, music, my self-understanding, my life decision-making, and into all leadership roles. As I finished college, I fell in love with Ivor, the man who was to become my husband (now ex-husband). I know it is both shallow and cliché to stake one’s anti-racist identity on “having a black friend,” but being a part of a multi-racial partnership - a partnership that intentionally addressed racism on a daily basis - was transformational for me beyond any training, committee, or education. Though our marriage eventually fell apart, my relationship with him remains the most important of my life.

As my dedication to countering oppression has expanded over the years, it has deepened from an intellectual and ethical commitment to a spiritual and theological commitment. Central to my theology is the pull toward wholeness, fed by an ever-widening love. Yet racism hampers our ability to love – no matter our race or ethnicity.

In Killers of the Dream, writer Lillian Smith describes racism as a fragmentation of knowledge – a splitting of mind, body, and soul.’[3] We learn this fragmentation as small children – the culture of racism teaches us to be divided from each other, dividing us at our core – at our very capacity to love. Systemic racism teaches both whites and people of color that people of color are less worthy of love – often resulting in whites who are alienated from their ability to love the other (internalized superiority), and people of color who are alienated from their ability to love themselves (internalized inferiority). We are all damaged by this fragmentation. We must each seek healing – not just for the wholeness of society, but for the wholeness of our very souls. 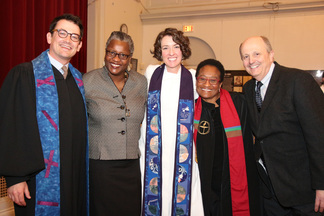 All Souls DC & Starr King School for the Ministry Leadership - Two organizations demonstrating sustained comittments to the work of Racial Justice
Rebecca Parker writes that part of the solution to this fragmentation is for whites to counter racism through “Engaged Presence.” “Racism is a form of cultural and economic violence that isolates and fragments human beings. Engaged presence counters violence by resisting its primary effect. As a white person, the cure for my education into ignorance is remedial education. The cure for my fragmentation of self is hospitality to myself. The cure for my cultivation into passivity is renewed activism. Social activism becomes a spiritual practice by which I reclaim my humanity, and refuse to accept my cultivation into numbness and disengagement.”[4]

This is the importance of religious community in the work to counter racism and other oppressions. Religious community is where we practice Engaged Presence. Beginning with love of self, we stride together on our journey toward collective wholeness – teaching each other the hidden history and calling each other into the constant renewal of our activism. We cannot do this alone, and we cannot do it without a deep grounding in the healing power of love and the ever-present pull towards wholeness. The journey is its own reward.